The Kings Head have just come back from their annual November trip to Leuven. This is one of the less ancient traditions of the club but it is already becoming quite a yearly laugh. And we are building up very good relations with the excellent Desperado Chess Club of Leuven. It is all down to Mark for organising the first trip 5 years ago. I got the chance to meet a collegue from Chess Today, GM Mikhail Golubev. I work as technical editor and we have corresponded by email but never met. It was very interesting to meet him. He drew with Epishen when it seemed that no one could stop him winning the tournament but then in the final round he was on board 1 but lost to the winner Torre. But he got an interview with him and has annotated the game for a future issue of Chess Today.
Website www.chesstoday.net

The tournament was won with a superb 2681 rating performance by GM EugenioTorre 2508 with an unbeaten 8 out of 9.

We finished as follows with our rating performance on the right.

Steve had his usual tournament and only lost to the winner. He also drew with Grandmaster Giorgi Bagaturov who, like Steve has won the tournament in the past. Colin also had a great tournament and drew with Bagaturov. Hopefully Colin will send the game to me soon to put on the site. I only have the games from the official site so far and a swindle from myself (see last game). Richard had a great 1997 performance and played some great chess. I hope he will be sending me his closed Sicilian win soon. Tom played a great tournament considering he hasn't been playing much recently. He even beat me! I didn't do too bad with 4.5 out of 9. Ron Crooks drew with a 2129 player with Black and nearly pulled off another of his usual grading prizes. Alistair outperformed his grade but Mark was below after losing a tired last round to Alistair. Kevin had a difficult start to the tournament but picked up as it went on and he probably was hoping it was longer. But next year it will be back to 7 rounds and so we will all have to dust ourselves off and have another go at this wonderful, friendly, competitive and exciting chess festival.

Below you will see these games and you can play them through by clicking on the moves on this side of the page or by using the controls under the chessboard on the left where they will appear. Some of the photos are animated gifs which you can play by refreshing your broswer window, usually with the F5 key in most browsers.. 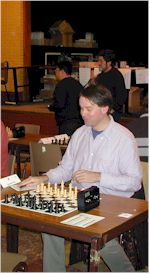 Tom Phillips - 27th in a tournament with 7 GMs, and lots of IMs and FMs was no mean feat! Beating the webmaster even more so!

Alistair (right) explaining his moves to his opponent.